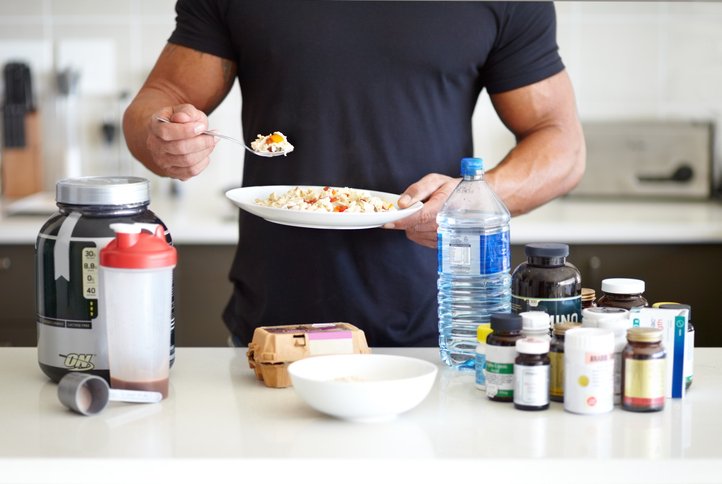 Home » News » How to Eat to Lose Fat and Gain Muscle, Part 1

How to Eat to Lose Fat and Gain Muscle, Part 1

If you were in a stadium with 50,000 people and an announcer said “Raise your hand if you have ever been on a diet.” 95% of the hands would go up.

Now, the announcer would say “Stand up if you lost weight and kept it off for five years.”

Looking around the stadium you would see a lot of people sitting on their butt with a scowl firmly planted on their face.  In fact, of that 95% dieting some 90% have experienced failure, over and over again.

How can we put man on the Moon, have supercomputers, prosthetic limbs and a host of other massive scientific breakthroughs and still not solve the simple question about how to lose weight safely and for life?

If it’s not working, try something

Hopefully I can answer this for you and get you started down the right and final road to answer this perplexing question. In this first part we will look at why conventional wisdom does not work.  Some of what you read may seem confusing, but remember the status quo is not working 90-95% of the time so sticking to old ideas regardless of how many times you have heard them is of very little use. After all, if you were a heart patient facing a 90% plus failure rate for surgery it would probably be a good idea to keep an open mind for something new.

To understand what to do, let’s first look at why present programs often fall short.

Can you Lose weight by Cutting Calories?

Almost all diet plans have this as one of their basic tenants. The only problem is that it fails miserably! If this method worked (and “worked” means you kept the weight off) then 60% of the USA population would not be overweight. It fails on multiple fronts.

The human brain is motivated by two powerful impulses; the need to avoid pain and the need to gain pleasure. What’s the first three letters of the word “Diet”? DIE! How many folks have you known over the years that truly enjoyed denying themselves and feeling hungry all the time? I bet not many. If being on a diet is both physically and mentally taxing & painful then both consciously and unconsciously you will eventually sabotage your own efforts. In addition, since being on a diet is often stressful, the resulting prolonged stress will equal higher levels of cortisol and epinephrine which leads to increased visceral belly fat.

The body interprets caloric restriction as a famine event (stress) and consequently lowers metabolism, as well as fat-burning hormones and elevates hunger and fat-storing hormones such as Ghrelin (stimulates hunger) after only 5% of your body-weight is lost. Cutting calories may be appropriate for someone who has been significantly overeating but it is often the wrong approach for most dieters.

Are all Metabolisms Equal?

One plan says low carb, then another say high carb, blah, blah, blah. The truth is that you just cannot give everyone the same plan and expect the same result. Most major plans do this including the ones heavily advertised on TV and magazines. They also could care less if you lose 40 pounds and regain 45 next year. Now you are a return customer and good business. You should go back and see your Cardiologist for check-ups but you wouldn’t want to have heart surgery every 12 months for the rest of your life would you?

The producers of these plans know that most will fail and return to buy again. According to one of the most respected nutritional experts in the world Dr. Phillip Goglia, there are three basic metabolic types (1) Fat & Protein efficient– roughly 74% of the population. This individual metabolizes fats and proteins very well but struggles with carbohydrates. (2) Carb-Efficient has a strong stable insulin response and processes carbohydrates easily but can only tolerate proteins and fats in smaller amounts.  They make up around 23% of the general pop. And lastly (C) Dual Metabolism. The luckiest but most sensitive of the bunch, they process carbs, fats and proteins evenly well.

Almost all plans give the same ratio of nutrients to every person. But if you have a Carb efficient person eating the popular Keto or Paleo diets their results will be poor and they’ll build arterial plague (that’s bad). If you look at the USDA’s findings and most physician sponsored plans they push variations of the Mediterranean diet or one based on 12-15 servings of healthy grains a day. But if you are Fat/Protein efficient this will send you down the road to Type 2 diabetes, obesity and heart disease. In fact there has been over a 300% increase in diabetes and obesity since the USDA switched from the four food groups to the Food Pyramid in the early 80’s.

To lose weight safely and permanently you must eat according to your individual metabolism, follow an exercise program that is correct for your body type/metabolism, avoids the famine response and the inevitable metabolic slow down by using appropriate caloric management and sets you up for success by empowering you and avoiding self-sabotage behavior.

In Part 2 of this series we will examine the popular Paleo and Keto diet plans and if they are correct for you.